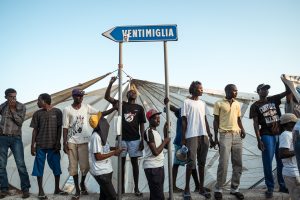 [2015] – During the largest refugee crisis since World War II, the flow of migrants reaching Italy by boat and headed overland for northern Europe is interrupted by the closure of the French border on June the 8th 2015. Within a few days, near the Italian border town of Ventimiglia, a crowd of 200-300 migrants is formed. On June the 11th, the Italian police attempts to forcibly deport them. Many resist and take shelter on the rocks, creating a first makeshift camp a few metres from the posh French Riviera town of Menton.

Two months later, the makeshift camp has been moved in a shady parking lot a few hundreds metres away from the rocks. A group of activists from Italy and France joined forces with the migrants stranded at the border. Together they built a sort of atypical refugee camp, a self-managed community providing hospitality, relief and advice to migrants in a solidary environment. In this space, delimited by the sea, the border and the railway to France, migrants have the opportunity to regain strength. And to be treated again with respect and love after days, weeks or even months of travel, often under inhumane conditions. Among infinite dreams, stories, hopes and uncertainties, one thing is clear to all: nobody is going back.

The camp is evicted by the Italian police on September the 30th 2015. On the morning of the eviction, in a last symbolic act of resistance, migrants and activists took shelter again on the rocks, as the day when the camp was born. Only after an entire day of negotiations they agreed to leave the border area. The migrants were transferred to the Red Cross shelter at Ventimiglia train station. The activists returned to their daily lives, some of them with charges for illegal occupation of public land.

In early November 2015, the police seals surrounding the seized area are among the few remaining traces of the camp. The following before/after series, witnessing an absence, focuses on the landscape mutation of the border area after the camp eviction.