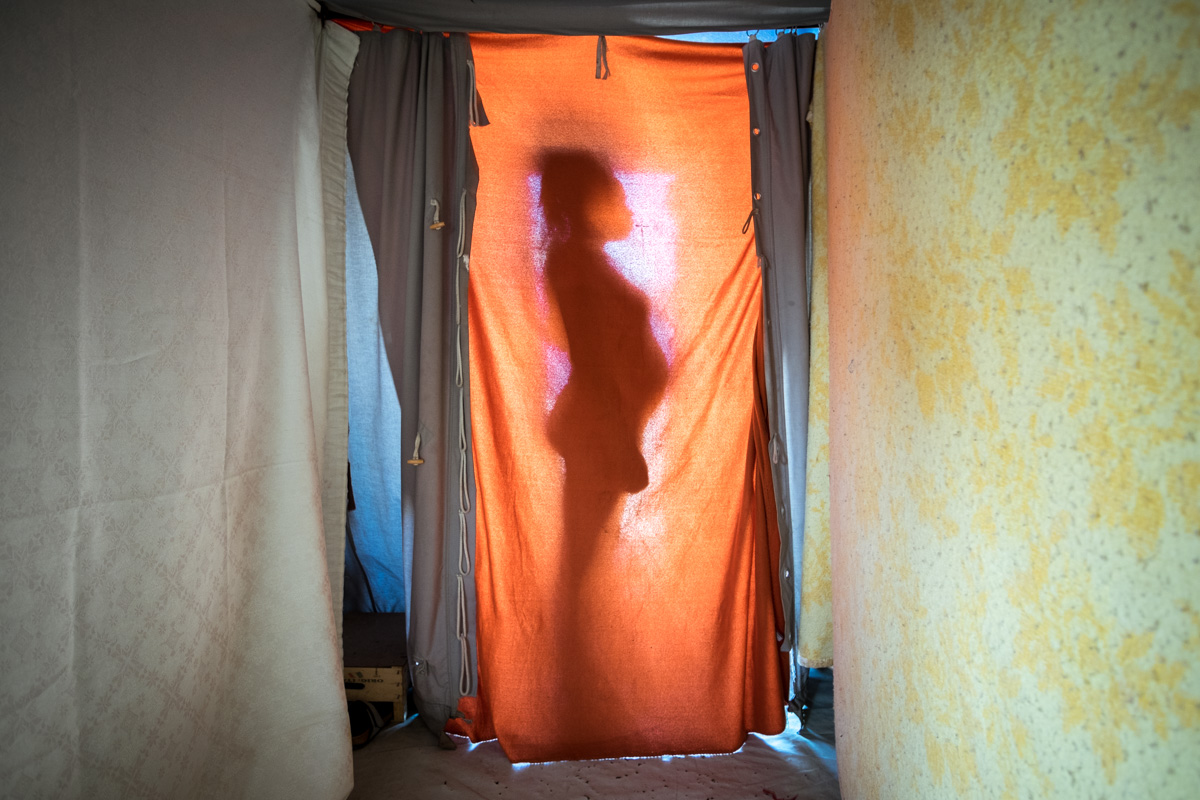 Through a collective narration made of portraits, testimonies and daily life insights gathered at various reception centres across Italy, ’Life after hell' aims to return names, voices and faces to the refugees who faced the horror during their journey and fled the Libyan hell to build a new life elsewhere.

The IOM estimated that as of the end of 2016 there were 700,000 to 1 million migrants in Libya, many of them unlawfully imprisoned under inhumane conditions in illegal smugglers detention camps. Fleeing tremendous suffering and abuse, between Jan 2014 and Oct 2017 on average 8 people a day have lost their lives in the Mediterranean trying to reach Italy. It is the most lethal migratory route in the world, with more than 10,000 deaths in 3 and a half years (source: IOM).

Nevertheless, during the same period more than 500,000 people reached Italian shores. Over 270,000 of them have applied for asylum and have to face a 2-years wait to obtain a decision on their cases. These are their stories, told from different reception centres across Italy during the summer of 2017. 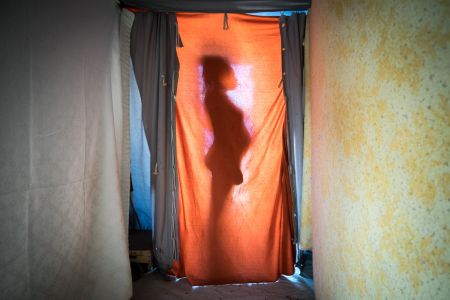 Life goes on: an asylum seeker who is pregnant, is waiting for her case to be processed so she can move on from the camp in Settimo Torinese (Italy) where she is currently hosted. Here portrayed at the entrance of her tent. 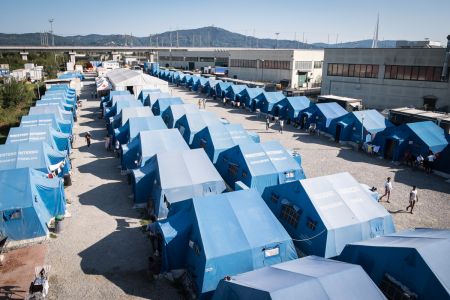 The Italian Red Cross 'Fenoglio' camp in Settimo Torinese (Italy) seen from above. 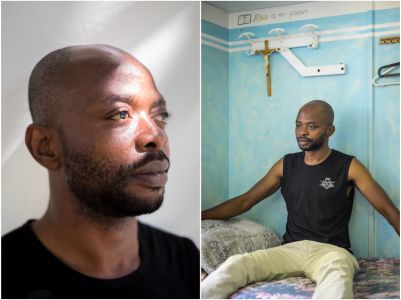 Honest (39, from Nigeria), here portrayed in his room in a reception centre in Bergamo (Italy), was rescued with more than other hundred migrants on a dinghy adrift in the Mediterranean sea.

"I could not se outside [the dinghy] but only up because I was lying on the floor. I was praying, crying, shouting... 'Jeeesus'! I was not myself, I was just in spirit...

When my head calmed down [after the rescue] I looked at the sea around me and at my boat, now empty... in that moment I started crying... from that moment I believe in God!” 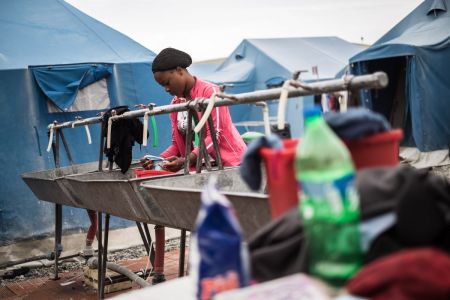 A woman washes her clothes in the camp where she is hosted in Settimo Torinese (Italy). This Red Cross camp, built with tents from the Italian Civil protection can host, depending on the situation, up to 500-600 people. 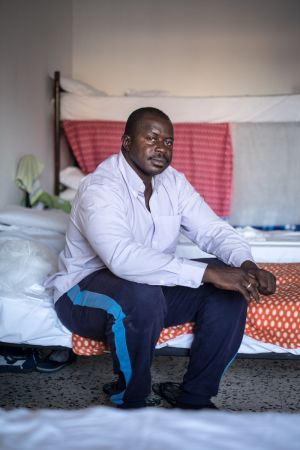 Alhagie (44, from Gambia) portrayed in his room at a reception centre in Messina (Italy). A former Gambian soldier, Alhagie left his country in early 2016 and reached Italy after leaving Libya on a dinghy.

“I think a lot about my family, that's my main concern. I left a wife and four kids in Gambia and it is almost three weeks that I'm not able to speak to them”. 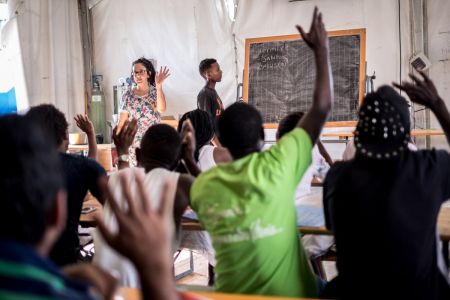 Language courses, together with food, accommodation and a small amount of pocket money are the basic commodities granted to asylum seekers in Italy, while they wait for as long as 2 years for their cases to be processed. 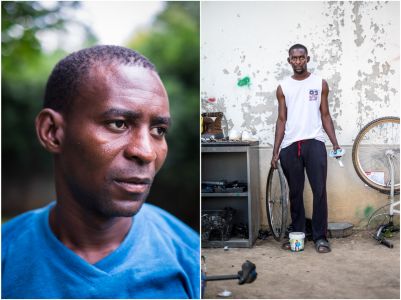 Prince (33, from Nigeria), portrayed in a reception centre for asylum seekers in Bergamo (Italy).

He fled his country to find a cure for a chest problem, and he is now undergoing a treatment in Italy. He reached Italy after having been rescued from a dinghy adrift in the Mediterranean sea. He quickly became very popular in the reception centre, as he decided to open his own bike repair workshop in the centre's premises. 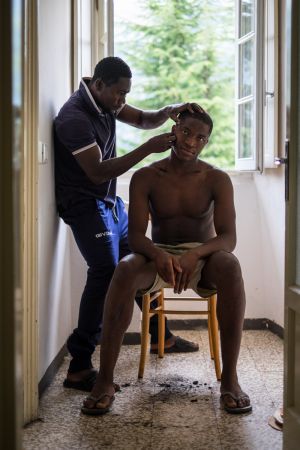 Daily activities in a reception centre in the Bergamo province (Italy).

Hosted in Vedeseta, a mountain village with a population of 215 people, this centre hosts around 35 asylum seekers who are self-managing all the basic activities of the centre: cooking, cleaning, gardening, etc. 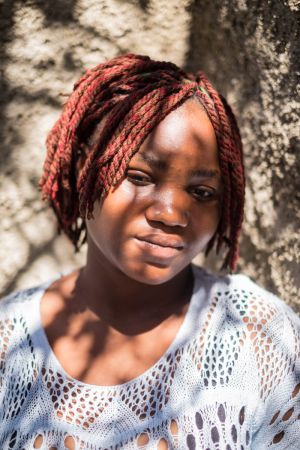 Joy (18, from Nigeria) portrayed in a reception centre in Messina (Italy).

She lost a close friend at sea, while attempting to reach Italy on boat an inflatable dinghy with other 190 people. After drifting for 18 hours somewhere in the Mediterranean, her friend was one of the 25 people who tragically drowned in the melee when a rescue boat was sighted. 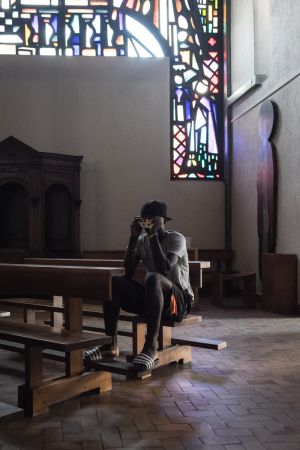 In a Catholic church in Bergamo (Italy), an asylum seeker hosted in a nearby reception centre takes a photograph.

The disposable camera he is using has been provided by local photography students who are teaching a workshop in photography in the centre as part of their final school work. 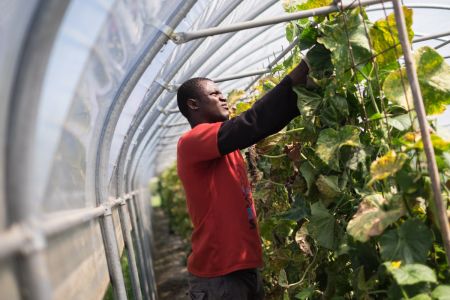 The farm employs asylum seekers and refugees hosted at the local reception camp. Mohammed has worked on the farm for five months as an intern – earning around 600 Euro a month. He is hoping that his internship will lead to full employment. 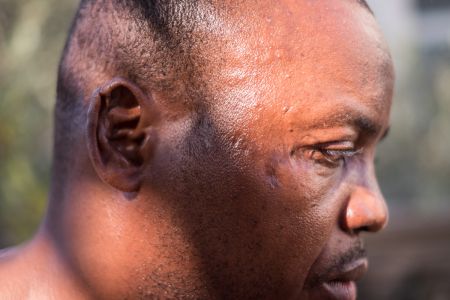 Moses (37, from Ghana) photographed in a reception centre in Messina (Italy). The scar in his face dates back to the 2 years he spent in Libya.

“They tied me after I tried to escape [from a smugglers detention centre], and they hung me up so that my legs were not reaching the ground. Then they mercilessly beat me with pipes. […]

They starve you, they attack you for so many days, so that you'll be willing to pay a ransom for you release. Or else if they get any of their partners who is willing to buy, they sell! they sell human beings there!”. 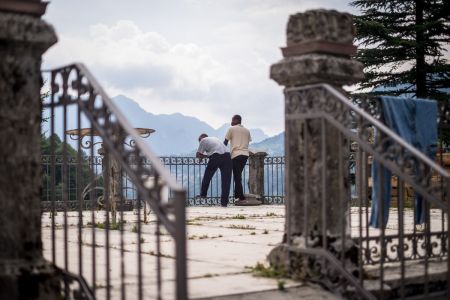 Two asylum seekers observe the surroundings from the terrace of the local reception centre where they are hosted in Vedeseta, a mountain village in the Bergamo area (Italy).

During the 2-year wait for their international protection applications to be processed, asylum seekers in Italy are distributed according to the places available in numerous reception centres nationwide.

Those centres can be as small as the one in Vedeseta (35 guests) or huge as the one in Mineo (Sicily) that hosts up to 4,000 asylum seekers. 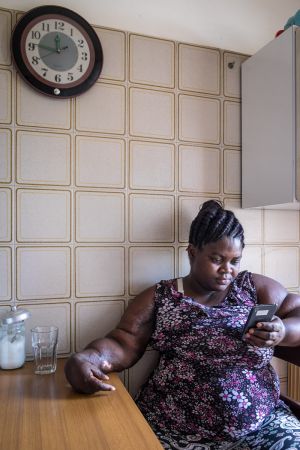 Mercy (30, Nigeria) in a temporary house for asylum seekers in Bergamo (Italy).

Living in this apartment with her husband Abdulai and the newly born daughter Fareeda, Mercy fled her hometown in Nigeria after her house was set on fire by enemies of her family.

On her right arm are still visible the severe burns provoked by the fire. 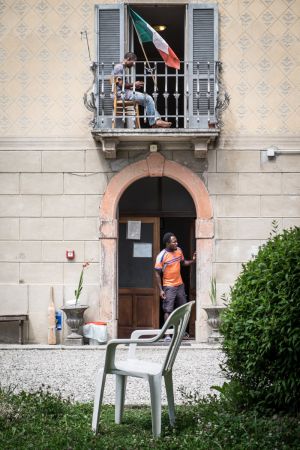 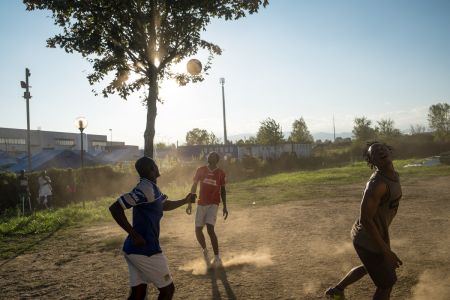 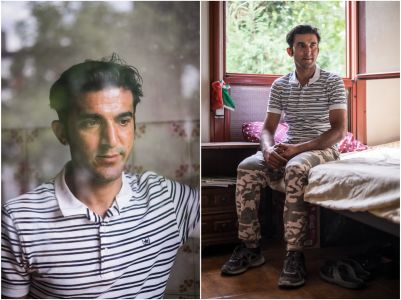 Khurram Shahzad (33, from Pakistan) portrayed in a temporary house for asylum seekers in Modena (Italy).

A homeopathic doctor back in Pakistan, now he is employed as a seasonal worker in a factory in Modena. “I'm married and I have 2 child, 7 and 6 years old. I'd like to bring them here if my asylum request is accepted” 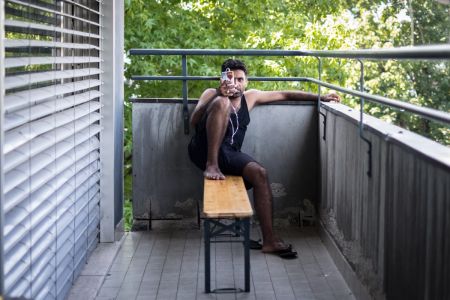 An asylum seeker on his phone in a reception centre in Bergamo (Italy).

Andrea Ostinelli, a social worker in the same centre says: “Having to wait as long as 2 years, I think the reason why many guys spend their days sleeping or on their phone watching music videos is the lack of personal fulfilment. You see many of them here and you can tell that their strength is missing. They miss... they are powerless. It is a pity to see people reduced to this... I think they are not fulfilled as human beings. They are not human beings here." 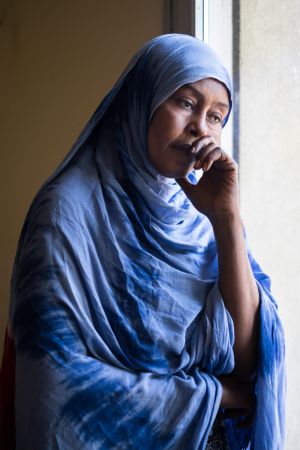 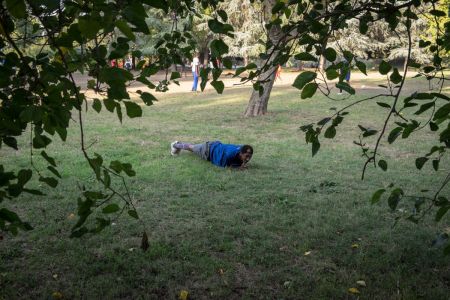 A young asylum seekers hosted in a reception centre in Formigine, near Modena (Italy), during his workout session in a nearby park. 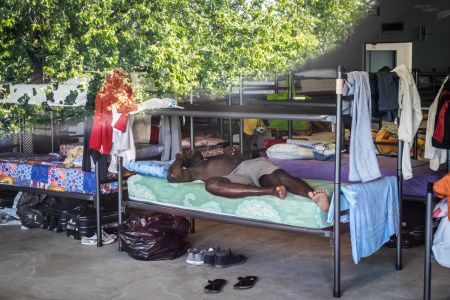 An asylum seeker lying on his bunk bed in a reception centre in Bergamo (Italy).

Of the over 500,000 migrants who reached Italy embarking from Libya since 2014, around 270,000 thousands filed an asylum request, and as of the end of 2016 around 100,000 are waiting for a decision on their status. This volume of requests, combined with the endemic slowness of the Italian judicial system, has prolonged the waiting time to roughly 2 years. 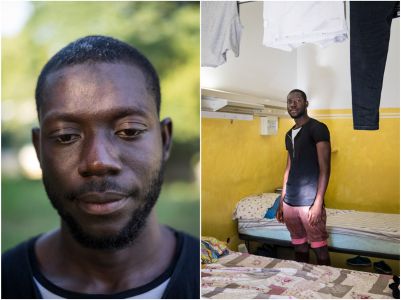 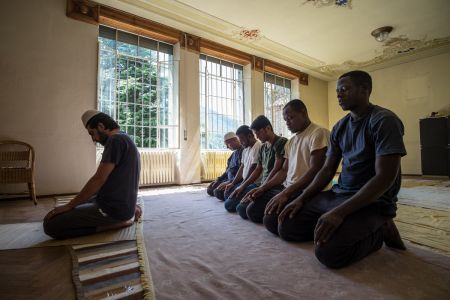 Asylum seekers during the Muslim afternoon prayer in a reception centre in Vedeseta, in the Bergamo province (Italy).

Formerly a mountain residence for Catholic nuns, the house hosting them has been converted to reception centre only in recently. 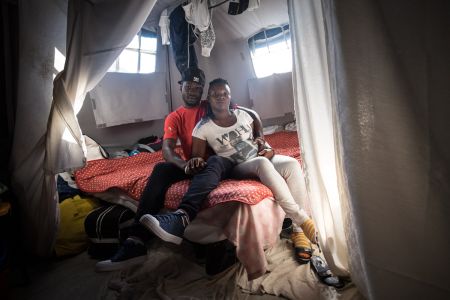 Yakaub (23, from Mali) and his wife Fatima (20, also from Mali) portrayed inside their tent in a reception camp in Settimo Torinese (Italy).

With their first child expected in a couple of months and their asylum request still to be processed, they hope the Italian authorities will be able to provide them with a more appropriate accommodation soon.

This production was co-financed by the EU-funded Migration Media Award and supported by its partners ICMPD (International Centre for Migration Policy Development) and Open Media Hub. Part of the photo/video material was produced on assignment for the British Red Cross and SOS Méditerranée. The reception centres visited are run by Caritas Italiana and Cooperativa Ruah (Bergamo and Vedeseta), Italian Red Cross (Settimo Torinese and Messina) and Cooperativa Caleidos (Modena and Formigine).